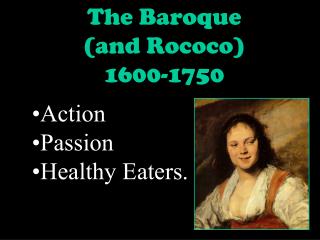 The Baroque (and Rococo) 1600-1750 Action Passion Healthy Eaters. Counter Reformation was over- Catholic Church was strong again-Protestantism was on the defensive Countries at war (30 Year’s War, Hapsburg empire) Secularization of gov’t

Baroque and Rococo - . 17 th and 18 th century. baroque. the term baroque once had a negative meaning. the name

Baroque and Rococo - . avi3m. review quiz. what period came directly before the renaissance? name 2 of the 4 renaissance

Rococo - . characteristics of rococo : according to stokstad, rococo is refined, fanciful, and often playful (939).

The Rococo Period - . 1725-1775. what is rococo?. derives from the french word rocaille , which refers to the delicate

The Eighteenth Century: From Rococo to Revolution - . outline chapter 16. chapter 16: rococo to revolution outline the

Rococo Art - . the rococo period followed the baroque period and is associated primarily with france in the 18 th