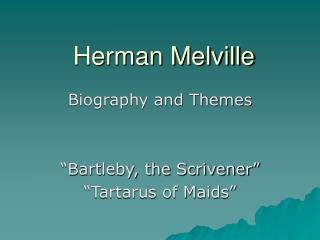 Herman Melville - . but it is better to fail in originality than to succeed in imitation. he who has never failed

Herman Melville - . melville as a sailor (not so accustomed to the brutal life). merchant vessel to england whaler

Herman Melville Moby Dick - . if you can get nothing better out of the world, get a good dinner out of it, at least.

Herman Melville Benito Cereno (1855) - . point of view. a novella about perspective and ideology why must we see thru