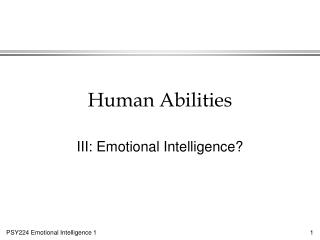 Human Abilities. III: Emotional Intelligence?. Reading. Start with Ch. 10 in Cooper (QOL) Article and websites on QOL. Learning Objectives. Following the lecture & reading you should be able to:– Show an understanding of the reasons for developing the concept of emotional intelligence (EI)

Human abilities - . presented by mahmoud awadallah. what do we perceive in a glance. of a real-world scene?. bryan

Human Abilities - . understanding users lecturer: michael mcguffin. acknowledgements: some of the material in this

Inside Abilities - . daniel kline and lauren mchugh. what are abilities? architecture postmortem. table of contents. what