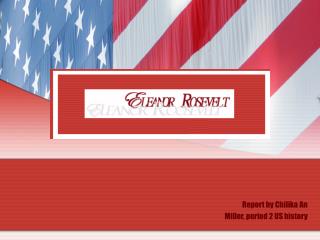 Report by Chilika An Miller, period 2 US history. Who Is Eleanor Roosevelt. Eleanor Roosevelt – the wife of Franklin D. Roosevelt was one of the centuries’ most influential woman. I greatly admire her for her incredible strength, character and humanity.

US History Unit 2 - . the civil war and its aftermath. increased sectionalism. new land up for debate. with the mexican

Week 2 US History - . u. s. history. come in and take out your ssij’s. sit quietly at your desk and get ready for the

US HISTORY SEMESTER 2 - . final review. in world war i, which country made the first declaration of war ? germany serbia

US History Practice Test 2 - . take a copy of practice test 2 from the table. we will review some commonly missed

BY: Nick Cortes 2 Period - Under the hood. pc. by: nick cortes 2 period. places to save files. you can save your files to

By: Ja’quan Mouche ’ Period: 2 - . christmas carol staring :changed scrooge and marley. some similarities about the

Chilika Capital Strategies - . speculation is dealing with the uncertain condition of the unknown future. every human

US History - . may 16, 2013. political parties splinter. democrats held their convention in charleston, south carolina a

US History - . unit 7, week 1. the cold war. homework for the week. monday cornell notes from textbook on your paper

US History - . unit 6, week 4. homework for the week. monday 1/27 begin studying for the unit test on block day tuesday

US History - . unit 4 week 2. homework for the week. tuesday find a 2 nd source for your research outline and take notes