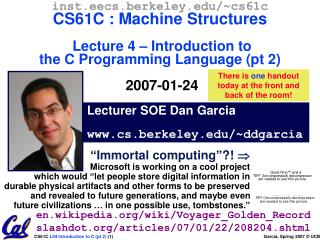 inst.eecs.berkeley.edu/~cs61c CS61C : Machine Structures Lecture 4 – Introduction to the C Programming Language (pt 2) 2007-01-24 There is one handout today at the front and back of the room! Lecturer SOE Dan Garcia www.cs.berkeley.edu/~ddgarcia

AFTER-ACTION REVIEW (AAR) - . 1. after-action review. “we must continue to look critically at our abilities to achieve