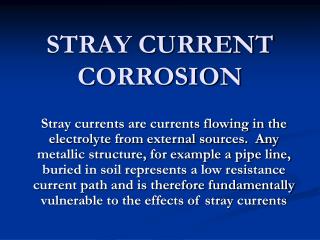 STRAY CURRENT CORROSION. Stray currents are currents flowing in the electrolyte from external sources. Any metallic structure, for example a pipe line, buried in soil represents a low resistance current path and is therefore fundamentally vulnerable to the effects of stray currents.

Stray Birds - . tagore 泰戈尔. stray birds of summer come to my window to sing and fly away .

Corrosion - . what is corrosion?. in general corrosion is the deterioration of a material by electrochemical reaction

Corrosion - . what constitutes an anode/cathode pair?. in summary– anything that makes two half-cells different

Corrosion - . corrosion  is the disintegration of an engineered material into its constituent atoms due to chemical

CORROSION - . the university of technology brno, school of chemistry. 20.4.2005 pavel haška. something about

Corrosion! - . by: sarah stallings. problem. out of rubbing alcohol, peroxide, lemon juice, and vinegar what cleans

CORROSION - . rusting of iron is the commonest form of corrosion. it is the process that gradually destroys motor car

Corrosion - . what constitutes an anode/cathode pair?. in summary– anything that makes two half-cells different gives

Corrosion - . today’s lesson. what is corrosion and how can it be prevented. corrosion questions start write up for

Corrosion - Galvanized electrical conduit. corrosion. -- spontaneous redox reactions in which a metal reacts with some

Corrosion - . by ross james and alex. corrosion- what is it?. corrosion comes from the latin word “ corrodere ” and

Corrosion - . formation of oxides. corrosion:. the chemical reaction which occurs between a metal and oxygen which