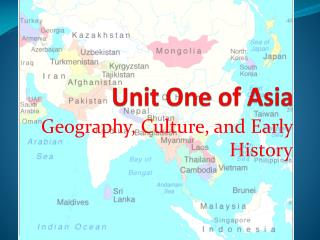 Unit One of Asia. Geography, Culture, and Early History. Japan - Effects of Climate. Climatic conditions have a major effect on population distribution, agriculture, and industrial development in Asia. Economics of One Unit - . chapter 2 yek. profit. pay yourself expand the business start other businesses how do we

Unit 2 Asia - Modern history. unit 2 asia. colonization: is forced control of one nation by another nation to gain power,

Unit 6: Asia - . ss7h3a describe how nationalism led to independence in india and vietnam. ss7h3:. the student will

South Asia Unit - . the subcontinent. a closer look at the breakdown of india…. india is a federal union of states. 28

Unit 2 Asia - Modern history. unit 2 asia. colonization: is forced control of one nation by another nation to gain power,

Unit One - . geography: its nature and perspectives. what is geography?. geography is a representation of the whole known

Unit one - . creating a nation. “history is a guide to navigation in perilous times. history is who we are and why we

About this presentation - QS Overview QS Asia QS London QS Intelligence unit - . qs vision. qs strives to be the most