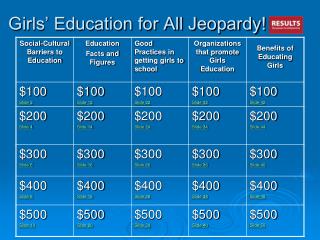 Jeopardy!! - Powerpoint jeopardy by chuck martucci, rockville high school -can be integrated on a smartboard -includes

Shaping STEM Education for Girls: New Research on How to Engage Girls in the STEM Fields - . larry goodman, ph.d director

This is Jeopardy - . on with the show. welcome to the jeopardy of mathematics. the questions are based on grade 7

Girls and Maths - . tom garner. aims of session:. to help you identify girls who will potentially underachieve from your

Jeopardy PLUS! - . created by: courtney sayward for edu5120. jeopardy plus! directions. similar to regular jeopardy

Jeopardy - . the crucible acts i &amp; ii *choose a question from the board on the next slide. click once to reveal

Empowering Women and Girls - . cgw4u. part 1. education. education. “when you educate a girl, there is a ripple effect