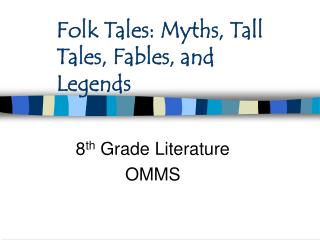 Folk Tales: Myths, Tall Tales, Fables, and Legends. 8 th Grade Literature OMMS. What are some tall tales that you remember? What is the difference between being famous and being legendary? Can someone be a legend during his/her own lifetime? . In your opinion…. Folk Tale Genre. Study Skills - . personal study skills survey. try and take notes. before class. think about what the class is going to

Tall Tales - . project information page. activities. what is a tall tale ?. how did tall tales get started?. johnny

Tall Tales and Peculiar Parodies - . an exploration of fairy tales and their counterparts. “fairy tales are rich

Myths, Legends, Folk Tales, and Fables - . why we write and tell stories. myths. attempt to answer basic questions about

Literary Genres 101 - . fiction these are stories that are not real! they are made-up. can include fairytales, folktales,

Myths, Folk Tales, Fables, and Fairy Tales - . what is a myth? a myth is a story that usually explains something about

Myths, Folk Tales, Fables, and Fairy Tales - . how are they similar and different? adapted from: kim denney by stephanie

YEAR 12 CLASSICAL STUDIES mythology - . schoolhistory.co.nz. what is a myth?. muthos means ‘utterance’ or something

BRITISH LITERATURE AND LEGENDS - Canterbury tales and the legends of king arthur. british literature and legends.