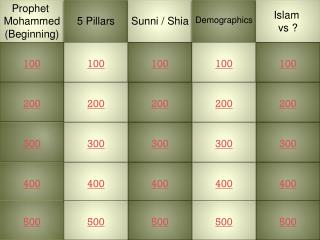 Ten Qualities of Prophet Mohammed as successful entrepreneur - . . islam is a complete way of

Legacy of Prophet Mohammed(pbuh) and Women and Children’s Rights - . *(pbuh) = peace be upon him. women’s

The Prophet Hood of Prophet Muhammad - . by: noura, anwaar, and nawal. how he became a

Beginning - . the band xero formed in 1996 and went under that name until singer mark wakefield left band was known as

Prophet Salih - . done by: shahzad edited by momina. people of thamud. after the destruction of the ad, the tribe

A Prophet - Like moses. a prophet. deuteronomy 18:15. “the lord your god will raise up for you a prophet like me

PROPHET OVERBOARD - . jonah. jonah was a prophet of god in the northern kingdom of israel (2 kings 14:25). he ministered