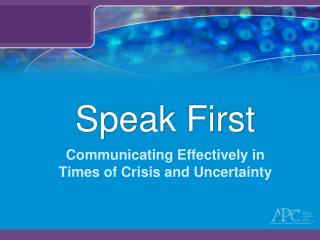 Speak First. Communicating Effectively in Times of Crisis and Uncertainty. Getting Started. Presenter (insert name and credentials) Participants Your name Your organization Your role. Presentation Objectives. Today you will learn: Why communicating EARLY in a crisis is so important. Getting Learners to Speak English During the Break - Find resources at http://bit.ly/eltlinks and

heißen - . to be called-named. sein. to be. kommen. to come. lernen. to learn. sprechen. to speak. machen. to do/make.

Why Speak? - . why speak?. dale carnegie said, “ there are four ways, and only four ways, in which we have contact with

Speak First - . communicating effectively in times of crisis and uncertainty. getting started. presenter (insert name and

Speak Discussion Questions - . part 1 “the first marking period”. what happens in the cafeteria that makes melinda

Speak First - . communicating effectively in times of crisis and uncertainty. getting started. presenter (insert name and

The Law of God - . the purpose of this study is not to present a position, but to allow the scriptures to speak for

It's amazing how you can speak right to my heart Without saying a word, You can light up the dark - When you say nothing

Bitter Waters - . the laws of jealousy. numbers 5 a teaching about the reconciliation between b ride and groom. numbers