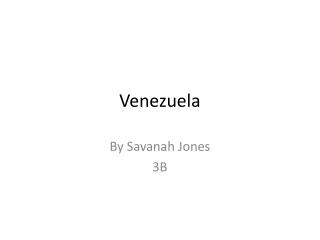 Venezuela. By Savanah Jones 3B. Capital of Venezuela. Caracas. Flag of Venezuela. Population. 29,105,632 people. Venezuela is located by, around and next to…. Brazil Columbia Guyana The Columbian Sea The Atlantic. Languages. There are 40 languages spoken in Venezuela

Venezuela Manuel Barragan Mrs. Valencia 16 June 2009 - . introduction. has 23 states and the district capital. has an

How important is Venezuela in the Geopolitics of Energy - . venezuela: energy overview. venezuela has the largest

Venezuela - . elicia bilyeu. venezuela is located at the t op of south

Venezuela - . by: maricela dones. map of venezuela. population. venezuela has a population of about 27.22 million

Venezuela - . the vice minister of tourism of venezuela proposes as tourism destinations: so that they might be

Venezuela's crumbling hospitals - Many of venezuela's 40,000 doctors are becoming increasingly militant over drastic

Venezuela - . by masun braun. where is my country?. venezuela is on the continent of south america. the countries that