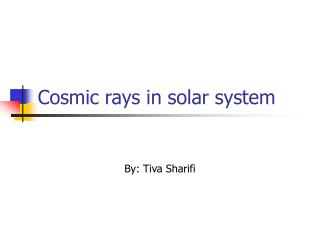 COSMIC RAYS: - Catch a cosmic ray program. cosmic rays:. what do you know?. 1. cosmic rays are:. what kind of radiation?.

X-rays From The Solar System Barry J. Kellett - . introduction. this talk will focus on x-rays from bodies in the solar