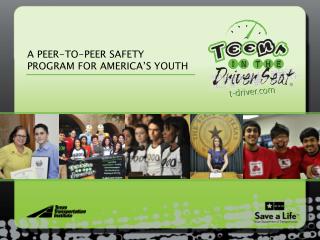 A PEER-TO-PEER SAFETY PROGRAM FOR AMERICA’S YOUTH. TOO MANY TEENS ARE DYING. Motor vehicle crashes are the #1 killer of teens in America About 3,500 teens per year are killed in traffic crashes in the U.S. and nearly 500,000 are injured (Source: NHTSA , Traffic Safety Facts , 2009). ptp - . soo-bae kim 4/09/02 isdl@snu. what is peer to peer?. communication without server advantage no single point of

Peer to Peer - . as a new mode of production, governance, and property. the p2p ‘tipping

An Overview of Peer-to-Peer - . sami rollins. outline. p2p overview what is a peer? example applications benefits of p2p