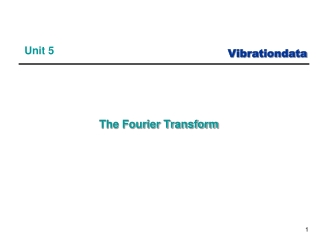 Unit 5. The Fourier Transform. Courtesy of Professor Alan M. Nathan, University of Illinois at Urbana-Champaign. Unit 5. Many, many different equations for Fourier Transforms . . . . . 1. Mathematician Approach 2. Engineering Approach Even within each approach there are many equations. UNIT 5 - . the origin of life and evolution. how a species is formed. biology and geology 4. secondary education.

Unit 5 - . topic 3 – erosion . erosion. erosion  is the movement of rock and mineral grains from one place to another

Unit 5 - . assessing the performance of fm for the future. overview. using the context of pa as the vehicle to

Discrete Fourier Transform - G( x ) is a function of value for. we can only examine g( x ) over a limited time frame,.