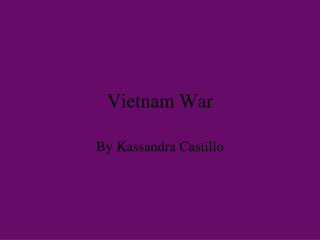 Vietnam War. By Kassandra Castillo. The Vietnam war began on November 1, 1955 and ended on April 30, 1975. It occurred in South Vietnam, North Vietnam, and Cambodia, Laos. People have given the Vietnam War several names such as Vietnam Conflict American War. Vietnam War-Powerpoint 2 - . rule. diem. diem was viewed by many normal vietnamese as part of the best who had helped the

Vietnam War - . look at the following images of the war and draw some preliminary conclusions about the war.

Vietnam War - . brainstorm. what is an alliance of convenience? who did the us back in the vietnam war? who were some of

Vietnam War - . a background to the war. brief history of vietnam. france assumed control over the whole of vietnam after

VIETNAM WAR - . vietnam. i. french and vietnam a. france controlled “indochina” (vietnam) since the late 1800’s

Vietnam war - . warm-up. why did the united states get involved in conflicts around the world during the cold war?. a