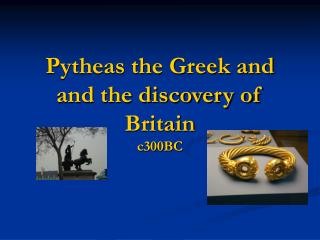 Pytheas the Greek and and the discovery of Britain Pytheas the Greek and and the discovery of Britain. c300BC. Britain in the Iron Age 600BC-60AD. Part One : Descriptions by Classical Authors. FIRST CENTURY BC ARISTOCTATIC BRITISH CELTS. TORQUE. Pytheas the Greek.

Pytheas the Greek and and the discovery of Britain

The Subatomic Cosmos and the Tools of Discovery - . introduction the standard model: the cast of characters the forces

The Greek and Roman Gods - . the origins of the gods the top 12 of olympus. creation of the world. from nothing, there

The Roman Invasion and Conquest of Britain - . the first

Britain and the EU - . 20 january 2014 by sigrid brevik wangsness. introduction. current british attitudes to the eu as

The Culture of Britain and America - . the syllabus. 1. introduction the aim of the course the organization the

The Greek and Roman Gods - . the origins of the gods. creation of the world. from nothing, there came chaos night and

The Greek and Roman Gods - . the origins of the gods the top 12 of olympus. creation of the world. from nothing, there

BRITAIN AND THE BRITISH - . 1) the british flag is called … the union jack the stars and stripes the maple leaf 1) a.

The Wonder of Discovery: Science and the Arts - . chapter 6 goldberg. watch a human baby or any young animal crawling

The Microscope and Discovery of the Cell - . the microscope. an understanding of cells and the ultrastructure of cells

The Gods and Goddesses of Greek Mythology - . where did greek mythology begin?. greece . long, long ago in ancient

Greek mythology and the odyssey - . mythology. myths are stories created to help a culture explain the world they live in

The Greek gods and goddesses - . by: nargis behgoman. zeus. the king of the gods/ father of the gods ruler of the world

The Greek Gods and Goddesses - . zeus (jupiter). god of the heavens, king of the gods symbols: thunderbolt, eagle

BRITAIN AND THE BRITISH - . quiz. 1. the capital of northern ireland is. dublin cardiff belfast. 2. the british flag is