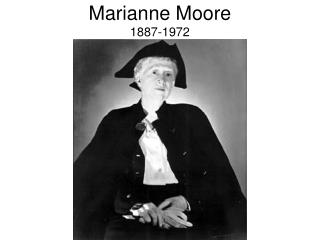 Marianne Moore - . the mind is an enchanting thing .

Marianne Moore - . “a poem is an imaginary garden with real toads in it.”. poetry. what do we know?. two ways to read

marianne Moore - “i see no reason for calling my work poetry except that there is no category in which to put it.” -

“Originality is a by-product of sincerity” ~ Marianne Moore - . my life. sarah wolfe escamilla. my life…. born and

1972 - Much like the first telegraph or phone call, the first email marked an historic moment in the evolution of

Marianne Douglas - The secrets of 21 st century teaching merging the strategies of the past, present and future. marianne