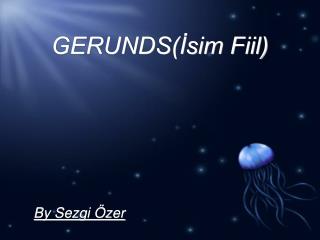 GERUNDS(İsim Fiil). By Sezgi Özer. What is the gerunds?. A ve rbal that ends in -ing and functions as a n oun . A gerund with its objects , complements , and modifiers is called a gerund phrase . . We are grouping the gerund with 4 main titles. Gerunds as Subject, Object or Complement