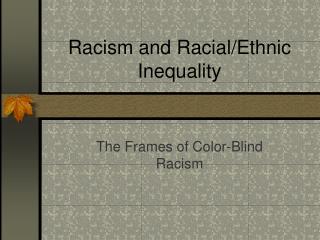 The Nazi Holocaust - . extermination of the jews. racism + social darwinism. at the end of the 19th century, racism

Expansion and Diversity - . the rise of colonial america, 1625-1700. i can explain why new englanders abandoned

The Great Divide - . what causes people to support one party instead of the other?. i. demographic characteristics. a.

Chapter 5 Biological Roots of Criminal Behavior - Major principles of biological theories. the brain is the organ of the

Insisting on Equity : Uncovering Classism and Racism in Ruby Payne’s Framework - . by paul c. gorski and the minnesota