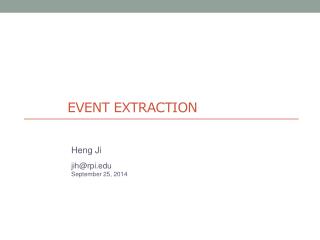 Event management - . some areas we considered in planning an event. conceptualizing the event marketing &amp;

Extraction, Transformation, and Loading (ETL) - . extraction and transportation. objectives. after completing this

Extraction as Classification - . announcements, etc. william will try and be quicker with moderator pages…. what is