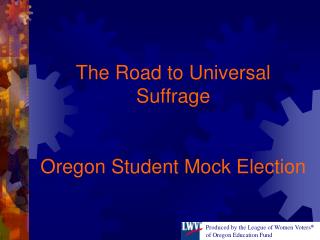 The Road to Universal Suffrage Oregon Student Mock Election. Produced by the League of Women Voters ® of Oregon Education Fund. A Representative Democracy?. The basic principle of a representative democracy is “one person, one vote” Mock Election - . students get to vote in the local, state and national elections. why is it important to vote?. these

Mock Election - . who = students in the middle school 8 th grade primarily with all voting what = we will elect a

FPTP v. PR Mock Election - . lesson starter what is an election? what do you think is the point of an election?. voting

William Annin Middle School Mock Election - . how to “register” to vote and create your moodle login…. go to the

Unit 6, Lesson 6 Mock election - . essential questions: what can i do to impact my government and community? learning

The Road to Student Financial Literacy - . a grass roots collaboration at the college of st. scholastica . current status