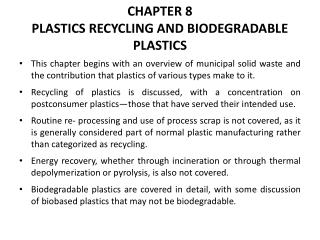 CHAPTER 8 PLASTICS RECYCLING AND BIODEGRADABLE PLASTICS. This chapter begins with an overview of municipal solid waste and the contribution that plastics of various types make to it. Trees - The furnishing industry uses a wide range of materials such as timber and other wood products, adhesives,

Centre lathe - . the centre lathe is used to manufacture cylindrical shapes from a range of materials including; steels