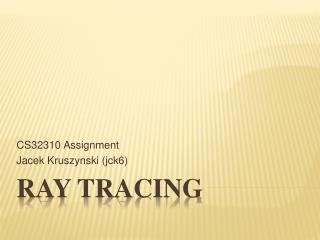 CS32310 Assignment Jacek Kruszynski (jck6). Ray Tracing. In Computer Graphics Ray Tracing is a technique devoted to generate images where light behave as naturally as possible. It is a very powerful and simple algorithm that currently is possibly most commonly used. A bstract. Introduction: