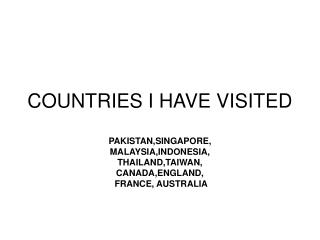 COUNTRIES I HAVE VISITED COUNTRIES I HAVE VISITED. PAKISTAN,SINGAPORE, MALAYSIA,INDONESIA, THAILAND,TAIWAN, CANADA,ENGLAND, FRANCE, AUSTRALIA. PAKISTAN. Pakistan is in the northwest part of South Asia. The eastern and southern parts of the country are dominated by the Indus River and its tributaries.

COUNTRIES I HAVE VISITED Best Muslim Countries for Holidays - , you might be fond of traveling, exploring the beauty of nature and enjoying Three Famous Temples In Thailand You Shouldn’t Miss To Visit - Planning a trip to thailand? here are the top three most

Important places to visit in Kuwait - Are you looking for best car rental companies in kuwait. dollar thrifty providing

What are the interesting tourist destinations in Singapore? - Singapore is a traveler’s haven because of the gorgeous

Look at the GDP of each of the countries. Which country has the highest GDP? - It has just been announced that in the

What connects us to Africa: Commonwealth - . by zoe wilson and maria chinnock. when did nigeria gain independence?

OBJECTIVES Present perfect stories - . the countries i have visited http:// www.quia.com/cz/335047.html. the present

Culture - Have you been outside the u.s.? as you enter, write the names of any countries you have visited or lived in on

visiteurope - Getting to know our visitors Setting up, managing and tracking the visitors - Visiteurope.com - getting to