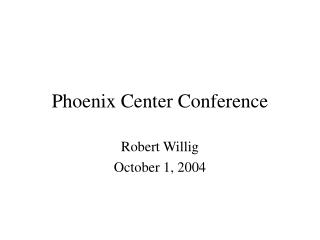 Phoenix Center Conference. Robert Willig October 1, 2004. Agenda (i). In these times of telecom revolution, we’ve got to get it right. Last mile is still bottleneck – maybe not for very long, but still. Conference ppt - . to mom and dad. from jeff. language arts. in language arts i have learned grammar, punctuation, and