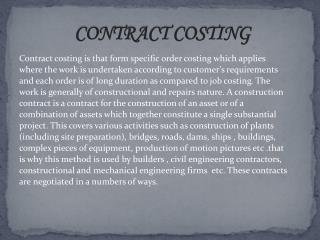 CONTRACT COSTING. Contract costing is that form specific order costing which applies where the work is undertaken according to customer’s requirements and each order is of long duration as compared to job costing. The work is generally of constructional and repairs nature. A construction COSTING - . what is costing. in cost accounting we analyse costs and calculate the cost for each unit of production cost

Standard Costing - . standard costing. a standard is understood to be a rule of measurement established by authority. an

Job Costing - . batch costing. job costing job costing is that form of specific order costing which applies where the

Process Costing - . chapter 17. quote for today. when i was a boy of fourteen, my father was so ignorant i could hardly

Process Costing - . purpose. assign material, labor, and manufacturing overhead costs to products and to provide a