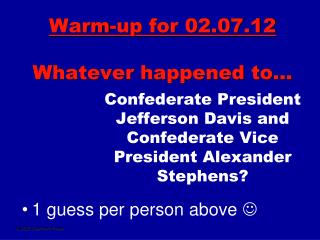 Whatever happened to RSD? - . andrew muir. history . 1872 mitchell described a syndrome of causalgia: limbs of american

WHATEVER HAPPENED TO THE NEW ECONOMY

Whatever Happened to Class (In Class)? - . civility issues in the college classroom. are classrooms less civil?. why is

Warm-Up 2/23/07 - . what are the 2 sources of genetic variation that we talked about? mutation gene shuffling (sexual

Whatever happened to… - . commitment?. “commitment”. “an agreement or pledge to do something; being obligated,

Warm Up #12 - . compare and contrast the codes of bushido and chivalry. unification and isolation in japan. how did

Warm up 5/07/13 - . question: what is mechanical advantage? answer: how much a machine multiplies force ma =output force

Warm Up #12 - Write a poem about something you have experienced recently. . warm up #12. romanticism and the rime of the

Warm-Up #12 - . where was the aztec empire located? retell the aztec myth about founding their capital city,

Warm-Up 12/02 - . find the distance between each given pair of points and find the midpoint of the segment connecting the