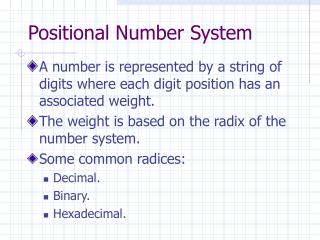 Positional Number System. A number is represented by a string of digits where each digit position has an associated weight. The weight is based on the radix of the number system. Some common radices: Decimal. Binary. Hexadecimal. Notation. Decimal. W = 123 10 = 123d = 123 Binary. Positional Number System - . position determine the value. s  set of symbols b = number of symbols in s b is base (or

Number System - . prepared by dr. anu gokhale. decimal, binary, octal, and hex. decimal is the number system that we use

Number System - A numeral system (or system of numeration) is a writing system for expressing numbers; that is, a