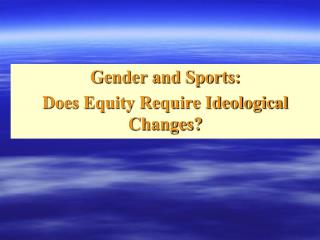 INTERNATIONAL CONFERENCE ON GENDER EQUITY IN SPORTS FOR SOCIAL CHANGE - . the kigali declaration on gender equity in

Gender Equality in Sports - What is the writer saying?. there is great sexual discrimination in sports today.if the

GENDER EQUITY UPDATE - . june 20/23, 2005 sponsored by the gender equity program advisory committee and the offices of

GENDER EQUITY - . based in part on how schools shortchange girls . american association of university women. clarifying

GENDER EQUITY - . oakland university student teacher seminar. what are things that we attribute to boys and to girls?.

Gender and Sports - . participation. most sports around the world have been defined as men’s activities and women have