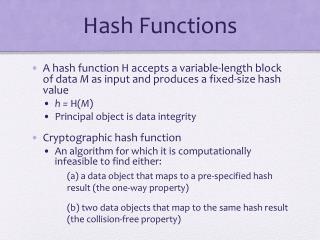 Hash Functions. A hash function H accepts a variable-length block of data M as input and produces a fixed-size hash value h = H( M ) Principal object is data integrity Cryptographic hash function An algorithm for which it is computationally infeasible to find either: Functions and Their Graphs - . chapter 2. texpoint fonts used in emf. read the texpoint manual before you delete this

Chapter 3 Functions and Files - . 3-2. getting help for functions you can use the lookfor command to find functions that

Polynomial and Rational Functions - . chapter 3. 3.1 polynomial functions and modeling. determine the behavior of the