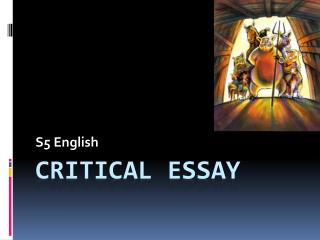 S5 English. Critical Essay. Good Morning S5!. In today’s lesson we will... Recap the structure of a critical essay. Look at some exemplars. Practice essay writing techniques. What is a critical essay?. A personal response to a piece of literature. Critical Essay - . in. some poems can provide an uplifting or joyful experience for the reader. choose such a poem and go

Critical essay - . the great gatsby by f. scott fitzgerald. marking criteria. in the essay, you are assessed on 4

Critical Essay - . today’s plan. what are central concerns and line of thought? common problems ways to plan your essay

Critical essay - . ‘the test’. may 2011. task. choose a novel or short story which makes you feel great sympathy

Critical Essay Revision - . intermediate ii. before you begin…. answer two questions from this paper. each question

Critical Lens Essay - . what is this and why do i have to do this? . the critical lens essay takes a look at literature

Critical Lens Essay - . what is this and why do i have to do this?. the critical lens essay takes a look at literature

The Critical Essay - . n5 english. what is being asked?. success starts with fully understanding what the question is

Critical Essay introductions - . tart t - introduce title of text a - author and brief statement about the main issues of

Critical Essay Workshop - . effective topic sentences. for today’s lesson you are going to need: your notes on p.q.e.

The Critical Essay - . structure. how will my essay be structured?. 1. introduction 2. main body- usually four or five