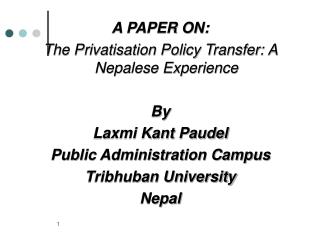 Immanuel Kant and the Ethics of Duty - . overview. part i. the ethics of duty part ii. universalizability and the

WHAT IS COMPARATIVE PUBLIC ADMINISTRATION ? - . quotes of the day . “ without theory, good planning is simply a random

Teaching for Transfer in Biliteracy: The Power of Word Study - Teaching for transfer. what transfers?how does transfer

The Transfer Experience - . robert curry, eit chabot college, engr10 aug. 26, 2009. presentation outline. who i am your