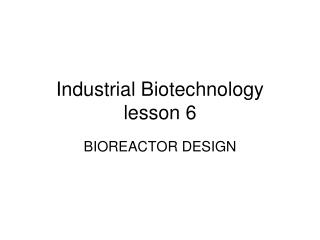 Industrial Biotechnology lesson 6. BIOREACTOR DESIGN. Introduction. The function of the fermenter or bioreactor is to provide a suitable environment in which an organism can efficiently produce a target product—the target product might be · Cell biomass · Metabolite · Bioconversion Product AN INTRODUCTION TO INDUSTRIAL ECOLOGY - . a2.3sr1 studies in sustainability 1. overview. what is ‘industrial ecology’

TOPIC 1 OVERVIEW OF INDUSTRIAL RELATIONS - . learning objectives upon completing this topic, students should be able to:

Agriculture and Biotechnology - . when you think of agriculture, what comes to mind?. do now complete this in a word