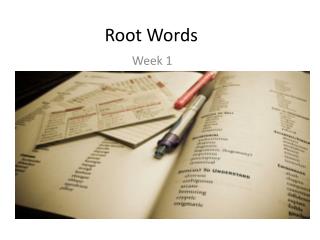 Root Words. Week 1. 1. aud, aus. Definition: hear, listen Class Examples: Audible - able to be heard Auditorium - the part of a theater, concert hall, or other public building in which the audience sits Audio - sound, esp. when recorded, transmitted, or reproduced Root Words - . created by connie campbell. a root word is a word that has a prefix, suffix, or both added to it.

Root Words - . week 1 you must copy this on your own sheet of paper. write this on the title line of your sheet:. ped =

Root Words - . dict. dict – speech dictum – a formal speech or statement abdicate – to say you renounce, give up

ROOT WORDS - . naut, naus, nav = relating to the sea, ships, or travelers. argonaut. a person who took part in the

ROOT WORDS - . dis = not, none. disadvantage. an unfavorable situation that is not good. disagreement. a quarrel; not

ROOT WORDS - . strain, strict, string = bind, tie, or draw tight. astringent. a substance used on the skin to make the

Root Words - . root word the form of a word after all affixes are removed. aster &amp; astro star astronomy,

ROOT WORDS - . struct = build. construction. what is built; buildings that are created or produced. destruction.