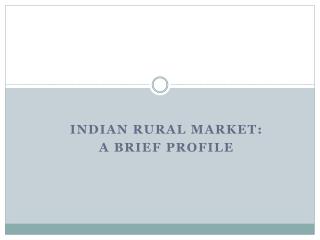 Indian Rural Market : A Brief Profile. Learning objectives of this chapter:. To understand demographic profile of rural India Be aware of different poverty alleviation and developmental programmes of government in the rural areas Analyze the rural consumption and spending patterns 4.1 The French and Indian War - . thesandwichjourney.blogspot.com. i can… summarize the causes of the french and indian

USDA Guaranteed Rural Housing (GRH) Loans - . we’re not the meat inspectors, but they are a sister agency in usda

The ICT Development Project Presentation - . harnessing the power of website &amp; scope for the indian youth .

Luis Garratón , Inc. Business Profile - . index. who we are our commitment our mission our vision values human resources

(A Govt. of India Undertaking - Ministry of Water Resources) Established in June, 1969 - Partnership with africa through