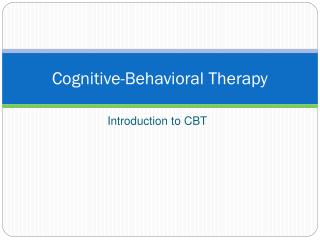 Cognitive-Behavioral Therapy. Introduction to CBT. Cognitive Behavioral Therapy is based on the observation that cognition, emotion, and behavior are reciprocally related . Emotion. James-Lange Theory of Emotion Action or response precedes emotion I run, therefore I must be afraid.