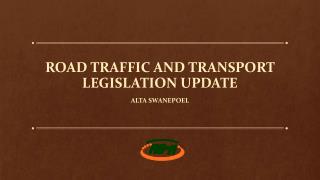 A PRESENTATION ON - . road safety. your safety is our concern. by district road safety committee visakhapatnam. your

KwaZulu-Natal Department of Transport - . presentation on the provincial budgets and expenditure review. mandate of the

ESOL for Driving - Sample questions from the (road and traffic signs) unit of the driving theory syllabus. road and

Europe and its road safety vision- how far to zero? - Prof. claes tingvall, director of traffic safety at the swedish