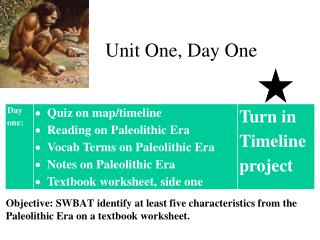 Unit One, Day One. Objective: SWBAT identify at least five characteristics from the Paleolithic Era on a textbook worksheet. Warm-up 1. 2. Give the number (for A to D) South America The Indian Ocean lies directly to the south of The Mediterranean Sea lies to the south of POETRY UNIT DAY ONE - . what is poetry? famous poets have defined poetry in different ways. w.h. auden called it

Unit One Terms Day 2 - . treaty of tordesillas- divided the world in 2 half. to the west spain would have sovereignty,

One day. One stage. - With legendary swedish dance music curators â€Žaxwell Î› ingrosso, the grandfather of

Unit One: Chapter One - . introduction to psychology. warm up. give me three examples of why someone would choose to

Unit One Lesson One - . how did constitutional government develop in great britain?. explain why american colonists had

“One Day...” - . one day, jesus and satan had a conversation, and jesus asked satan what was he doing with the people

“One Day...” - . one day, jesus and satan had a conversation and jesus ask satan what was he doing with the people

Day One - . history lab. should the colonists have revolted against great britain?. how do real historians figure out

DAY ONE - Chapter 8 understanding populations section1, how populations change in size. day one. what is a