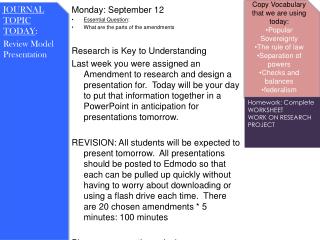 Welcome to the Presentation - . group – e. topic – environmental forces of abbl &amp; aibl. objectives of the

What is a phrase? How do phrases function in sentences? - 7 th grade language review take notes in your “end of the

Inborn Errors of Metabolism - Board review 11/27/2012. inborn errors of metabolism. test question. what topic should we

PRESENTATION ON SYNCHRONOUS MACHINE MODEL - . tandin jamtsho student #3226091. this presentation shall cover the

Topic 3 Physical Acoustics Review - . warning!!!!. this is a review. mastery is essential to understand the material

Schedule for Today - . announcement about wednesday match your presentation to revised schedule. presentation –

A Review of the Literature With Your Hosts Writing Center Staff and Faculty - . objectives. explore the role of the