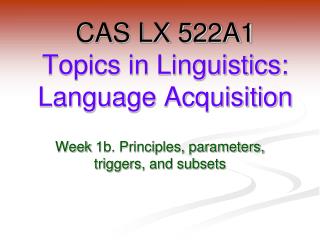 Optimizing a Lexical Approach to Instructed Second Language Acquisition - . frank boers. what parts of language is this

What is language? The side of sound: Phonetics and phonology and the beginning of morphology - . linguistics. the study

Nineteenth century: historical linguistics - . before the 19 th century, language in the western world was of interest