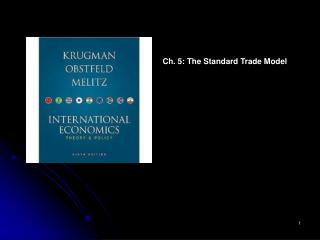 Ch. 5: The Standard Trade Model. Introduction. The standard trade model combines ideas from the Ricardian model and the Heckscher-Ohlin model. Differences in labor, labor skills, physical capital, land and technology between countries cause productive differences, leading to gains from trade. From Trade Theory to Trade Policy - Gains from trade : due to comparative advantage, produce surplus, convert it into

Trade and Environment at the WTO - . table of concents. brief history of the trade and environment debate trade and

TOPIC 7 International Trade - . definitions:. trade or trading:. refers to the transactions or the exchanges of ownership

Chapter 4 Resources and Trade: The Heckscher-Ohlin Model - . kernel of the chapter. a model of a two-factor economy

New Standard UL 62275 Cable ties for electrical installations - What is ul 62275?. for cable ties, it replaces the