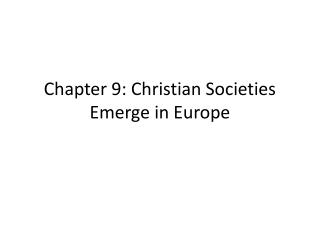 Chapter 9: Christian Societies Emerge in Europe. Warm Up. Trade brought Arabs into contact with: Most important trading town of Arabian peninsula: Ancient building that was considered sacred: Who started Islam and how did he get the idea? What two religions influenced his thinking: Regulation of the legal profession in Europe - . simone cuomo legal advisor, ccbe. introduction of the council of bars

Chapter 1 - . the pre-history of christian thought. questions to be addressed in this chapter. what ideas came from

Chapter 7 - . the christian apologists: interacting with gnosticism and other “heresies”. questions to be addressed

Early Societies in Americas and Oceania - . chapter 6. i. early societies of mesoamerica. migration from siberia to

Chapter 13 - The expansive realm of islam. chapter 13. who are the muslims, and how did they emerge?. who are the

Chapter 21: - . world's apart: the americas and oceania. states and empires in mesoamerica and north america. societies

Types of Societies - . chapter 4.3. group:. a set of people who interact on the basis of shared expectations and identity