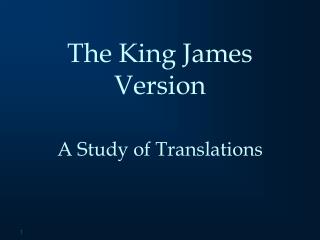 Matthew 23:23 (King James Version) - 23 woe unto you, scribes and pharisees, hypocrites! for ye pay tithe of mint and

Book of 2 Timothy King James Version - 2 timothy 1:1. paul, an apostle of jesus christ by the will of god, according to

King James - . new king james. for the mystery of iniquity doth already work: only he who now letteth will let , until he

King James Bible - He found him in a desert land, and in the waste howling wilderness; he led him about, he instructed

The King James Only Controversy - . separating fact from

The Story of Our King James Bible - . the first edition. robert barker. the son of queen elizabeth’s printer the only