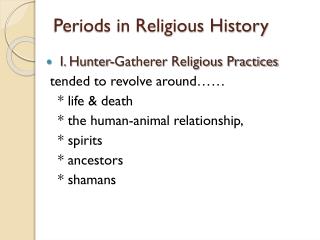 Periods in Greek History - . the 8 ages of greece. early greece . the history of greece can be traced back to the stone

Religious Education in England A short History - . paul hopkins. in this seminar i will. look at re in england (not the

Periods - . periods. one of the ways to organize phrases typically consists of two phrases linked together -antecedent

Fashion History B.C. &amp; Roman Time Periods - Opener for 1/24/12: look at the picture above from the movie

India: Early History and Religious Traditions - . what did the early complex societies of india and china share in