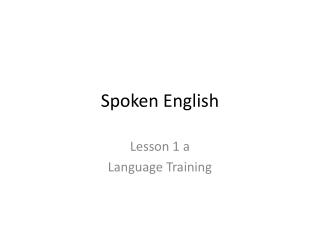 Spoken English. Lesson 1 a Language Training. When we speak or write we use words. A group of words that makes complete sense is called a Sentence. Kinds of Sentences. Sentences are of four kinds: Those which make statements or assertions; as, Mallika is sitting on the chair Spoken English - . on your desk:. name tag notebook pen. are you sitting in the correct seat?. team points. vampires.

Spoken English classes - Regardless of whether you're an amateur, middle, or progressed understudy, this is a decent

Advanced Spoken English - . written and spoken discourse. types of discourse. there are many ways to classify discourse:

Advanced Spoken English - . lexicogrammatical session 3: analysing a tv programme. discuss the questions below with your

Spoken English Classes - English is the global language so it is necessary to understand and speak the english language.

Online Spoken English Courses - Incepted in 2001, aksent corporate solutions is recognized as one of the top english

Spoken English in Coimbatore - The current scenario we must have the spoken english knowledge. it will really very

Online Spoken English Importance - Spoken english study is important for our day to day life. to get your business career