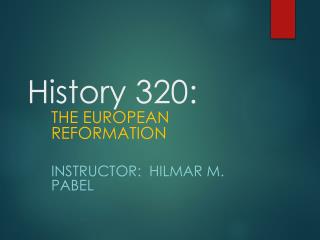 History 320:. The European Reformation Instructor: Hilmar M. Pabel. What is an historical question?. i(stori/a (history) as inquiry Factual questions: When / where was Martin Luther was born? Questions of broader significance require more than a single word or sentence for an answer. History 320 The European Reformation - . 500-word essay. questions for discussion. what is your historical question that

COM 320 History of the Moving Image - . intro to the moving image. what do we mean by the “moving image”?.

History 320 The Great Depression and the New Deal - . what caused the great depression?. not the stock market crash,

USD 320 - . in the course of developing an appropriate response to budget reductions, keep in mind the following: if a