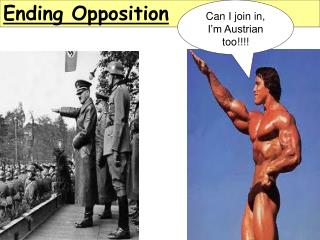 Ending Opposition. Can I join in, I’m Austrian too!!!!. Learning Objective. Can a rainbow help us explain how Hitler became Fuhrer?. Ending Opposition. Input. The Reichstag fire 27 th February 1933. Was used by the Nazi Party to discredit the Communist Party. Opposition - . why? how? formalities. why opposition? 1/2. better essays! the current degree project will undergo

Opposition - . e - describe multiple forms of resistance to the nazis . c - give reasons behind &amp; methods of

Ending - . workshop 2. learning goal. improve your ability to write a neat conclusion take out your weekend homework (the

Opposition Lecture - . are you sitting comfortably? i am not. lecture 2: the opposition strikes back. causes of

Controlling opposition - . censorship. under alexander ii, russia experienced glasnost (the policy of openness) for the

Opposition Intensifies - . the suffrage movement had always faced opposition but this intensified when the suffragettes

Answering the Opposition - . planting a naysayer in your text ch. 6 of they say / i

The Opposition: Intelligentsia - . from the naturalistic point of view, all men are equal. there are only two exceptions

Opposition to Bismark - . objectives: . what problems did bismarck face as chancellor of the german empire? how did