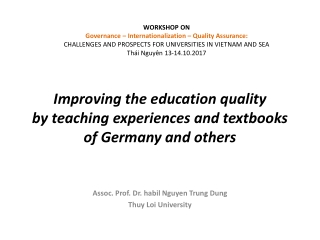 WORKSHOP ON Governance – Internationalization – Quality Assurance: CHALLENGES AND PROSPECTS FOR UNIVERSITIES IN VIETNAM AND SEA Thái Nguyên 13-14.10.2017. Improving the education quality by teaching experiences and textbooks of Germany and others. Improving the Quality of Vocational Education and Training in Turkey - . Şennur Çetin head of the vetdg social partners

Improving Teaching and Learning - . using ‘evidence based’ methods. who am i?. alastair fairfull 20 years in sebd

Data Quality Campaign: Improving the Quality, Accessibility and Use of Data in Education - 7/17/2012. 2. policy questions

Improving teaching and assessment in 14-19 Education - Westminster institute of education. the presentation. 30 years of

How Winning by Learning from the Punting Experiences of Others - Being a fan is fun. you never require playing to take

Measuring And Improving The Efficiency And Quality Of Care - Opportunity for improvement. indicated care given only 56%