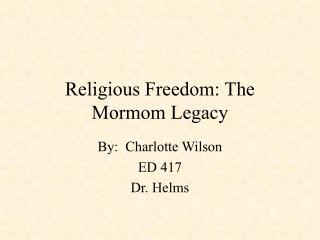 Villa Finale’s A Legacy Assembled - A legacy assembled : a preview of the villa finale collection on exhibit october

Effective promotion of legacy giving: A presentation of new research findings and theory - . presentation at legacy

Reference Guide on our Freedom &amp; Responsibility Culture - . these slides are meant for reading, rather than

Voltaire and the Enlightenment - . voltaire (1694-1778) pseudonym of francois marie arouet. voltaire was the most

Expansion of Freedom - . expansion of freedom launch. to do get out a sheet of paper and a pencil, clear your desk of

Dr. Faustus and Religious Culture - Marlowe was attacked as being neither (quote pg. viii in introduction) ...